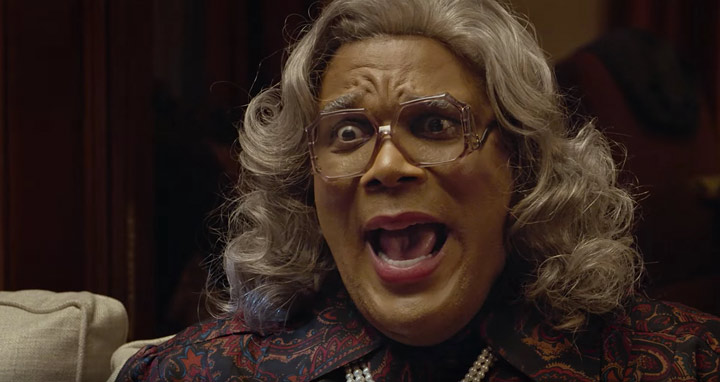 Finally answering whether the biggest star in the world is Tom Cruise or Tyler Perry pretending to be an old woman, Boo! A Madea Halloween just beat Jack Reacher: Never Go Back at the box office.

Over the weekend, the latest fat suit Madea has draped over a holiday topped the box office charts, taking in an estimated $27.6 million. That’s the third highest opening for a Madea film (logically, Madea Goes to Jail‘s titular promise proved most enticing) and ninth highest opening ever in the category “Comedy – Fat Suit,” which is an actual, ranked category of films now.

Facing reviews that made it seem as tedious and unmemorable as its name, Jack Reacher: Never Go Back fell into the second spot with $23 million. That’s a healthy amount more than the original Jack Reacher opened to in 2012, but, ultimately, the sequel’s box office haul should end up far below its predecessor. While the original was a sleeper hit that coasted on surprisingly strong word-of-mouth and a solid critical response, this one’s request to never go back is being increasingly heeded.

Also in its opening weekend, Ouija: Origin of Evil narrowly took third over last weekend’s leader, The Accountant, the films respectively bringing in $14 million and $13.6 million. The Girl on the Train dropped to fifth with $7 million.

Next week: look for Doctor Strange and Trolls to duke it out for which has better turned ’60s psychedelia into CGI!