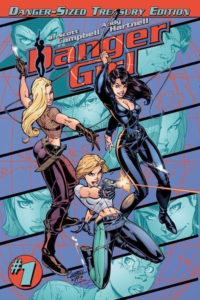 Danger Girl, the comic book that is the only ’90s Charlie’s Angels knock-off more gratuitously eroticized than Pamela Anderson’s V.I.P., is headed to screens. Constantin Film, the company that already gave us a modelesque woman blowing her knees out while shooting guns with the Resident Evil franchise, has reportedly picked up the rights to the J. Scott Campbell- and Andy Hartnell-created series. It’s said they’re developing both feature film and television efforts based on the property. At last, we may see the vast, interconnected Danger Girl live-action universe that a horny guy’s biologically impossible cheesecake drawings have so long demanded.