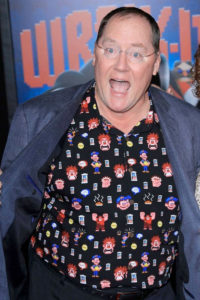 As is pretty much inevitable for a 60-year-old man who only wears Disney-themed aloha shirts, John Lasseter has been accused of predatory sexual misconduct. The director and Disney•Pixar CEO yesterday made Cars even harder to watch as he announced a six-month leave of absence from his position, citing “a number of difficult conversations” and “missteps”—euphemisms for his female employees finally calling him out on being a gross old creep straight out of a Mad Men arc.

Lasseter’s statement came as The Hollywood Reporter was preparing to publish an exposé on the Toy Story director’s grossly inappropriate workplace conduct. According to the since-run story, a longtime Pixar employee has labeled Lasseter as notorious for “grabbing, kissing, [and] making comments about physical attributes.” Other sources described a defensive move called “The Lasseter”—a technique for women to avoid their boss’s unwanted physical advances. It involved leaning forward and covering one’s thighs when seated beside Lasseter, as he was known to otherwise casually caress female employees’ thighs.

It’s said women beneath Lasseter knew to turn their heads when they saw him approaching to avoid his nauseating attempts at kisses. Per one former insider, “You’d hug him and he’d whisper in your ear, a long time. He hugged and hugged and everyone’s looking at you. Just invading the space.” Another clarified, “To sum this up as unwanted hugs is belittling and demeaning. If it was just unwanted hugs, he wouldn’t be stepping down.”

Coco, on which Lasseter served as an executive producer, opens nationwide today. Good luck enjoying that with this new behind-the-scenes trivia.