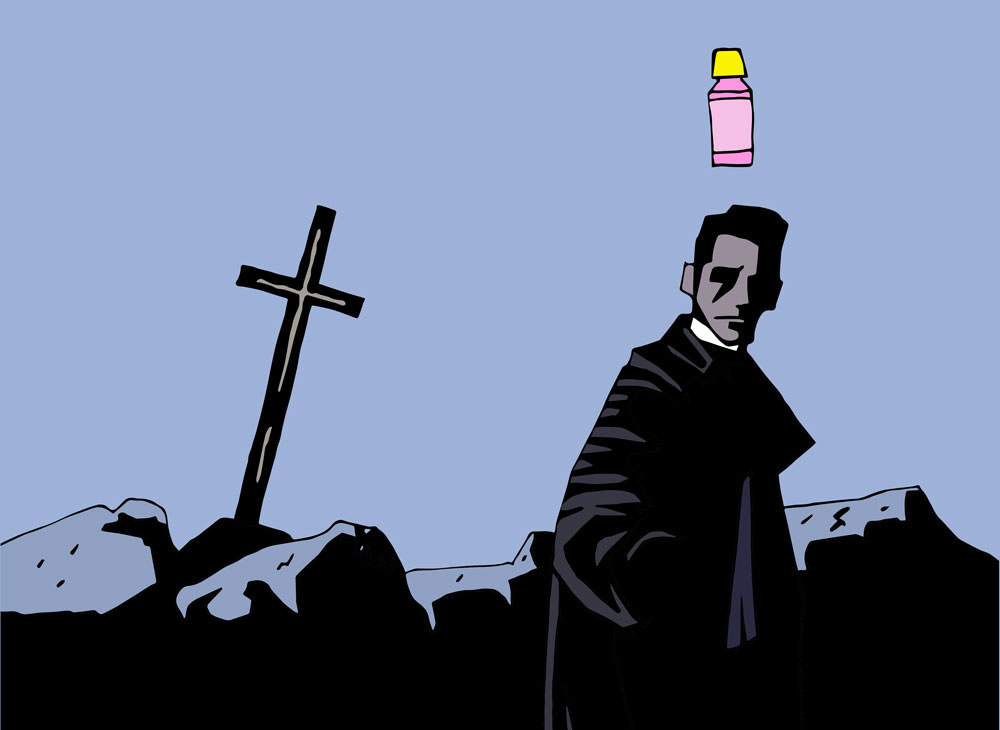 Written and directed by Taxi Driver writer Paul Schrader, First Reformed updates his iconic tale of a solitary white guy’s (literally) self-destructive radicalization—with quite uneven results. Opening on a bleak shot of the titular church, its steeple rising from a pair of bushes, its introductory phallus leads us into its toxically masculine tale of embittered violence, self-pity, and treating women solely as objects of either lust or contempt. It’s a visceral, enthralling, often beautiful character study too-often derailed by obnoxious tangents, casual misogyny, and navel-gazing—an engaging post-church chat constantly interrupted by a too-drunk dude’s ranting.

The film sees an ever-grimacing Ethan Hawke as Toller, an aggressively alcoholic priest who’s lost his wife, his son, and, increasingly, his health and faith. By way of a needlessly spelled-out diary mechanic, he provides a gravelly voice-over befitting a Frank Miller Batman comic, explaining his dire situation and ever more frustrated feelings. Both are exasperated when a young congregation member (Amanda Seyfried) approaches him with worries about her husband, whose fierce environmentalism has seemingly pushed him into a troublesome, nihilistic depression. Hawke’s priest agrees to meet with him, and after a very lengthy dialogue, the two each end up pushed further into the extremism that drives the rest of the story.

Carefully shot, and in an unusually narrow aspect ratio that quite effectively isolates its characters, First Reformed looks the youthful indie mold of distributor A24 more than one might expect from the 71-year-old Schrader (particularly after his abysmal Lindsay Lohan vehicle The Canyons). But as memorably fresh-faced as his direction looks, it’s unfortunate that his writing sometime drifts just as often toward the juvenile. Schrader’s script can be read as profound, even satirical, but more easily drifts into a clipboard-toting college kid’s screed as it lurches from quiet drama to “sign this petition” monologue. It’s effective—and woefully sound, scientifically—in constructing the leftist side of Trump-era extremism Schrader needs to build to his jarring, borderline silly climax. But as he lays it out in the film, complete with Hawke’s polar-bear-on-ice-floe desktop, it comes across as painfully preachy, an Inconvenient Truth incongruous over this pious Travis Bickle.

Still, despite its unwelcome faults—among them, an isolated, silly, and completely unearned sequence that lands between Lynchian and The Dude’s drug-addled fantasy—First Reformed is bolstered by such fine performances (Hawke will likely earn a Best Actor nod), cinematography, and other intermittently strong bits that it’s as much a success as it is occasionally laughable. Like its lead, it’s a wino dressed up all respectable, his bottles hidden in a trash can out back but hard to ignore if you stumble upon them. If nothing else, it’s a wonderful antithesis to the recent plague of Christian-themed pap hitting theaters—Toller, as he does time to time, oozing a bit of Pepto Bismol in our glass to make that harsh whiskey easier to keep down. God bless him.