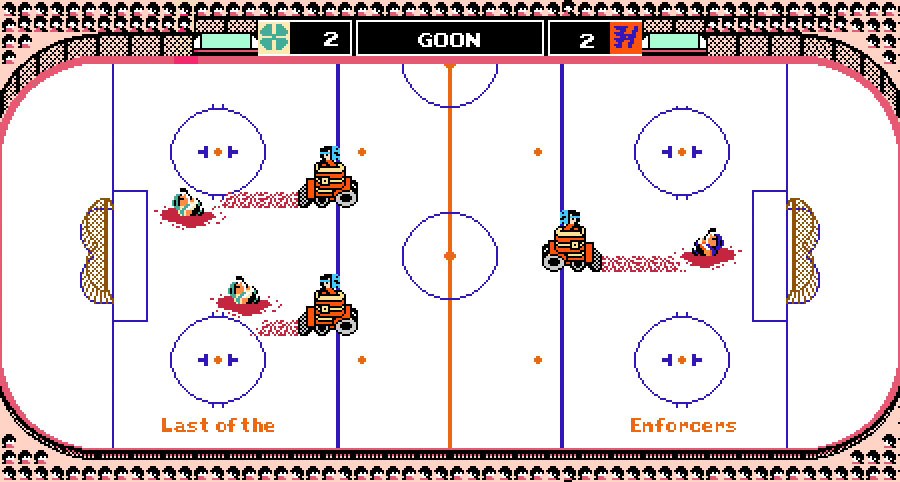 For a sophomoric hockey comedy about the rise of a player who’s good at fighting, the original Goon has a lot more going for it than other films of its ilk. Fable-like and heartfelt, Michael Dowse’s movie is a near-classic built on solid filmmaking and an unexpected, enormously-winning performance by Seann William Scott as Doug “The Thug” Glatt. The considerable care of the filmmakers is quite evident to the audience, and excellent supporting performances and (sometimes literally) operatic flourishes elevate Glatt’s tale to something more than just a bloody, foul-mouthed hockey movie. That Goon concludes so satisfyingly is no mistake—which is why Goon: Last of the Enforcers‘ attempt to reignite the magic from 2011 becomes another exercise in sequel hubris. It’s much more Ghostbusters II than John Wick: Chapter 2.

Goon 2: Last of the Enforcers provides an undeniable pleasure to see the characters again, but it’s a shame that they’re given such a scattershot venue this time. Aside from a few players transitioned to managerial positions with the Halifax Highlanders, the sequel picks up more or less where Goon left things. Abruptly, the status quo is interrupted when opposing player Anders Cain (Wyatt Russell) injures Glatt during a game and he is forced to retire. Glatt’s wife Eva (Alison Pill) discovers she is pregnant, Glatt settles into an oppressive office job, and an NFL lockout means the Halifax Highlanders are forced to cope with an influx of new players—including the loathed Cain. Understandably dissatisfied, Glatt contacts his former nemesis Ross “The Boss” Rhea (Liev Schreiber) in a bid to train his way back onto the Halifax team.

In this, his directorial debut, Jay Baruchel seems perfectly adept, if a bit unfussy. As much as the opening hockey game shows a passionately innovative approach to filming the sport, the rest of the film is just serviceable—especially during a soggy, meandering second act, and even hampered by a few moments of jarring ADR. His insistence on juicy, lurid bloodshed literally spreads itself thin, and owes much to Planet Terror in terms of squib absurdity. Baruchel at least had the good sense to diminish his own role as Pat while casting some reliable names for the new non-player characters; Jason Jones and T.J. Miller’s constant ad-libbing results in some of the funniest business in the film, and Elisha Cuthbert has strong if redundant passages as Pill’s wilder little sister.

The returning performers do admirable work reassuming their roles in Glatt’s life, from the various members of the Highlanders organization (Kim Coates’ Coach and Jonathan Cherry’s Belchy are deservedly awarded more screentime in Last of the Enforcers) to old friends and enemies. Schreiber’s Rhea is a standout, somehow instilling a new level of pathos into a character that already made for one of the most lovely, sympathetic foes to nonetheless wear a villainous mustache. Rhea may be the secret heart of this one, and he makes a strong counterpoint to the new villain—Russell’s increasingly-unhinged psychopath, Anders Cain. Really, though, the performance to watch—as was the case in Goon—is Scott in the born-to-play role of the world’s most lovable tattooed hockey bruiser.

Doug “The Thug” Glatt continues to be the same affecting, sweet, big-hearted lug that he was in Goon, and it’s a shame Last of the Enforcers doesn’t deliver the same elegance and poetry as its predecessor. While the first film wisely chose to tell its story from Glatt’s perspective, the sequel gets distracted by too many subplots and detours to cultivate the same emotional impact. Still, once the strong—albeit manufactured—third act finally gets underway, it’s easy to excuse all the table-setting leading up to a finale that unabashedly recycles successful beats from the original. Narratively, there wasn’t a need for Goon: Last of the Enforcers. But it’s a perfectly acceptable, occasionally very-good continuation of its predecessor’s story. If returns are going to continue to diminish, Last of the Enforcers should be last of the Goons.

(Note: At the time of this review, Goon: Last of the Enforcers had only been released in Canada.)

Goon: Last of the Enforcers