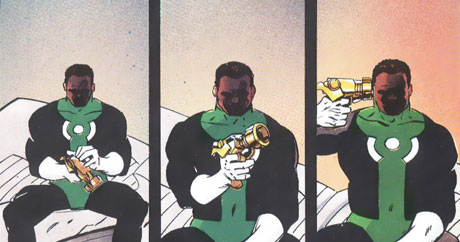 Wildly inconsistent superhero movie regular David Goyer has got himself yet another Warner Bros. comic book flick to slap a credit on. Since writing 1998’s David Hasselhoff Nick Fury movie, Goyer has gone on to pen (at least in some part) the Blade trilogy, the Dark Knight trilogy, Ghost Rider: Spirit of Vengeance, the Constantine series, Man of Steel, and Batman v Superman: Dawn of Justice. Now, with a Sandman adaptation already on his plate, he’ll apparently add to that co-writing Green Lantern Corps. Deadline reports that he and relative unknown Justin Rhodes will be collaborating on the script, said to going for a “Lethal Weapon in space” vibe between Green Lanterns Hal Jordan and John Stewart. Though, given the above scene, I guess Stewart will be Riggs?