The original Guardians of the Galaxy soundtrack—aka, Awesome Mix Vol. 1—was an instant phenomenon, breathing new life into some old hits that today’s damned kids somehow never heard before. Its runaway success led to a Mondo deluxe vinyl release, as well as a true-to-film release on a limited edition cassette—and that’s in addition to being put out on digital, CD, and standard vinyl. Yet, through all these releases, never was it playable on a laminated aluminum bag filled with glowing orange crumbs, salty powder, and saliva-drenched smudges.

Thankfully, the Guardians of the Galaxy, Vol. 2 soundtrack will correct that. 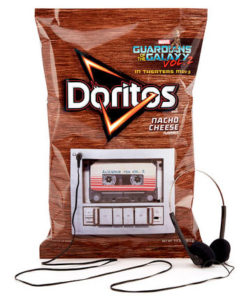 Billboard brings the news that Marvel has partnered with Doritos to release the entirety of the Guardians of the Galaxy, Vol. 2 soundtrack on an exciting new format: literal trash. More specifically, it will be released on Doritos bags.

Set to be released this Friday, the limited edition bags bear the image of a cassette deck rather than a photo of Doritos. Don’t worry; fluorescent chips are still inside. But should one plug headphones or speakers into the jack in front, the silvery garbage sack can play the entirety of the new film’s soundtrack. What’s more, unlike the intense electric flavor of Doritos JACKED, this can be recharged. So long as you carry a crumpled, greasy bag around with you, over a dozen hits of the ’80s will always be right at your orange-stained fingertips.

Fans looking for a Guardians bag shouldn’t look in stores, nor in the pile of Doritos bags piled near their Mountain Dew Code Red tower. These embarrassing iPod alternatives are apparently an exclusive at Amazon.com/Doritos and at events in New York and L.A. (Greeley Square in NYC, and at the corner of Hollywood Blvd. and Highland in Hollywood, from 11 AM to 7 PM ET/PT). Get there quick to be sure you’re one of the first to try out the hottest new tech: something to finally drown out the sound of your body begging you to stop eating Doritos.