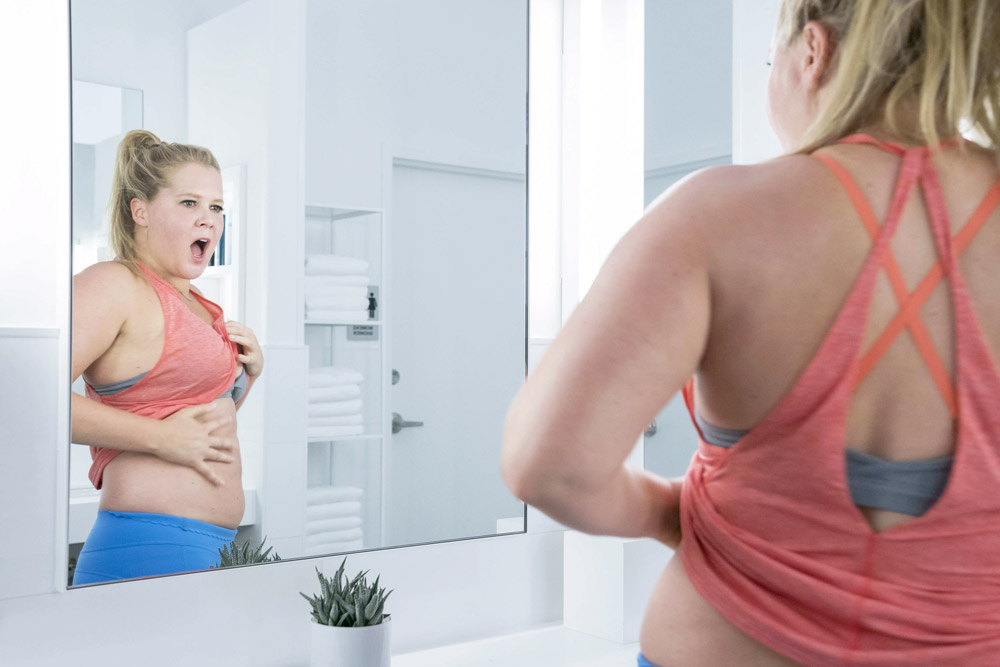 Is physical confidence the key to success and happiness, or is it laughable when one’s body is undeserving of such bravado? I Feel Pretty spends an often interminable 110 minutes pondering this question, only to answer: “Well, depends on the scene, and whether we’re trying to wring an obvious platitude out of our strained climax.” The shame is, like the point it’s ultimately trying to make, it needs to drop its apprehensions and just accept the unadorned, decent-enough that it is. Unfortunately, it doesn’t.

The film is the directing debut of Abby Kohn and Marc Silverstein, the writing veterans who brought you all the films your idiot sister recommends when you biennially see her and her ever-growing family. (Their seemingly start-with-the-title list of works includes Never Been Kissed, He’s Just Not That Into You, Valentine’s Day, The Vow, and How To Be Single.) From watching it, though, it feels more like the duo simply punched up a script an AI wrote after being shown hundreds of modern rom-coms, a few fantasy-comedies (Big, needlessly shown in-film, among them), and a list of advertisers to include.

I Feel Pretty takes place in a painfully-expository New York City seen only in the constant skyline shots of broad romantic comedies: all women working in magazines, fashion, or cosmetics; all the women working at these places are severe, judgmental, and beautiful; all lesser ladies are resigned to their “cheap” apartments that are actually still enviously spacious and in now-gentrified neighborhoods, but filled with slightly more eccentric, boho-chic furniture; and any opportunity for a pop music-scored montage is never yet always wasted. Still, it also must take place in our own world, because damned if this doesn’t have a lot of unabashed product placement for the likes of Target; Zumba; TruTV; Bed, Bath and Beyond; and SoulCycle (you’ll swear there was a mandate on the number of shots of their special shoes clipping into their stationary bike pedals).

Amy Schumer stars as Renee, a product photographer for a massive cosmetics company. For inexplicable reasons, she and literally only one other person—the huge corporation’s, again inexplicable, ONLY programmer—have been resigned to a small basement in Chinatown, while the rest of the employees are off on glamorous Fifth Avenue, with the rest of this myopic rom-com-fantasy’s workforce. Renee is Schumer at her least enjoyable: meek, apologetic, not even shouting about “cunts” because this is PG-13, and spending her evenings at dive bars with her friends, where they awkwardly hope to find men. Until, that is, thanks to the magic of concussions, Renee’s session at an exer-cycling class we will not name here again leaves her head-thunked to the point of abruptly shifting her body dysmorphia to the other end of the spectrum: she thinks she’s extremely attractive!

As much as Schumer’s vocal detractors may laugh at the idea of her being gorgeous (has there been a comic with such a proudly hateful anti-fanbase since Dane Cook?), Kohn, Silverstein, and the computer algorithm that drafted this before them find this even more hilarious. Under her brain-addled spell, Renee thinks men would hold doors open for her! She behaves as an equal to model-esque women who also for some reason work in office jobs! And she partakes in maybe the most confused idea of the already confused “bikini contest” ever committed to film—on a boardwalk clearly 250 miles from Manhattan, perhaps meant to be represent Coney Island, Renee enters a filthy bar’s bikini competition and is seen as out of place. Because normally it’s absolutely ravishing women entering such events, apparently.

Anyway, thanks to her newfound delusions, Renee finds the inner confidence that lets her get some gains she’s rarely had the bravery for before. Soon enough, she nabs a nice boyfriend, grabs the attraction of a hunky celebrity bachelor, and gets a job in that fabled Fifth Ave. office and quickly ascends the ranks, all thanks to the cocktail of her down-to-earth mentality and a sudden mind-rattling. (But also thanks to Michelle Williams’ boss Avery LeClaire, who despite her smoky-baby-voice that nears mockery of Melora Walters, is perhaps the first uptight rom-com boss to ever be non-villainous.)

It’s around there that I Feel Pretty both comes together and falls apart. Once Schumer is able to finally behave as the audacious, shameless character she’s constructed as a persona, her scenes play, and they elicit both small-scale truths and laughs. Yet Kohn and Silverstein use this only as an opportunity to precariously pile-on their high-concept premise, building no fewer than three iterations of their increasingly-frustrating conceit. There’s a pretty nice, far-subtler, and definitely funnier little rom-com buried in whatever they fancied themselves making here. It’s a shame they only saw this painfully thin thing they pictured in the mirror.