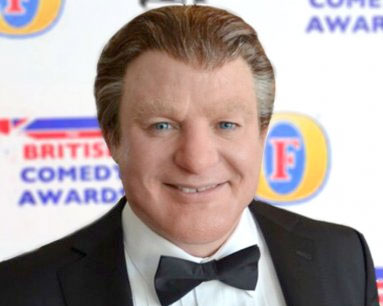 This year marks the 20th anniversary of Mike Myers taking on the iconic role of Austin Powers. Discarded velveteen jackets now sit untouched, crumpled at the bottom of Goodwill Halloween boxes. Cries of “yeah, baby!” have faded into oblivion, long ago drowned out by the already distant echo of “my wife!” An Amazon search for “Austin Powers” now ranks the complete Blu-ray collection lower in the results than Denise Austin’s Power Yoga Plus.

Yet, for some reason, Myers still isn’t done with British accents and prop teeth.

ABC today announced a revival of The Gong Show to be hosted by “cheeky Brit” comedian Tommy Maitland. Though the network has not explicitly said as much, Maitland (seen above) is quite clearly Mike Myers wearing his latest set of prosthetics.

But while Maitland is not real, no matter how much his needlessly lengthy bio claims otherwise, this Gong Show reboot is. Will Arnett is executive producing the series, and it premieres Thursday, June 22, at 10PM. As in its original incarnation, it will see a revolving panel of celebrity judges faced with dubiously performers who can be sent off the stage at the sound of a big metal disk.

So if you’ve been wondering why Myers was taking so long to follow up the character work of The Love Guru, now you know. Because he was waiting for Chuck Barris to die.