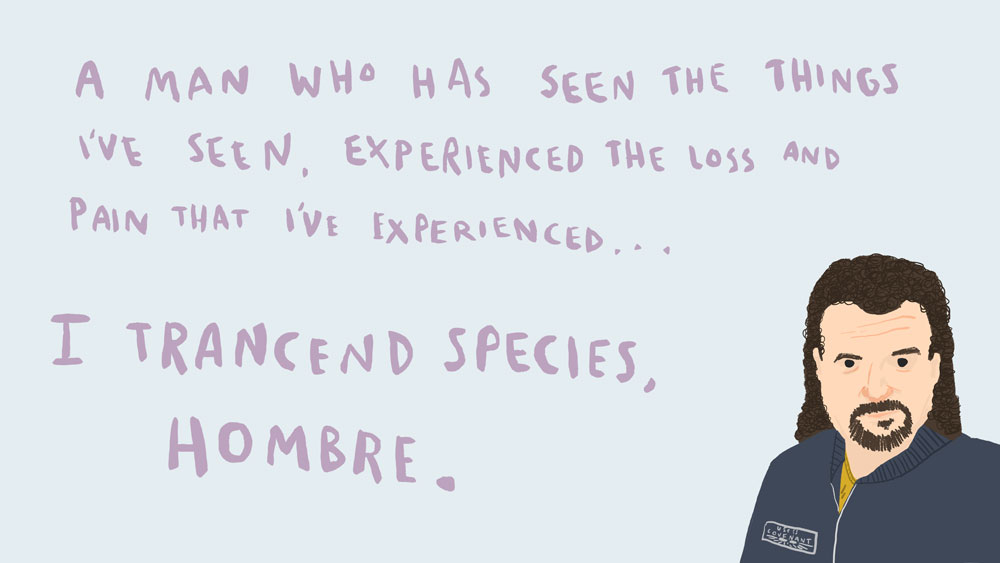 Ridley Scott’s follow-up to Prometheus, Alien: Covenant remains as fiercely devoted to religious analogues—particularly that of Father as Creator—as its predecessor. Yet, in creating another middling follow-up, Scott still never seems to realize the deep irony to his obsession. Each chapter he adds warns further of the Frankenstein-ian dangers of meddling with the natural world, even as every unnecessary sequel take us further and further from the simple beauty of the original Alien‘s setup.

The film begins with roughly the same premise as the original: a ragtag space crew in a cryo-sleep awakens and makes the stupid decision to investigate a planet with some awful creature on it. This time, they’re on a colonization mission. Frozen colonists hang like dry cleaning above drawers of fetuses—an image that will surely later be used as anti-Planned Parenthood propaganda. After a spontaneous disaster that claims the first of many crew in needlessly gruesome fashion, a vague transmission invites the titular ship to take a brief jaunt to what they believe to be an alternate habitable planet they could settle in. Instead, what they find there is a Prometheus follow-up to the mistaken idea that spores are a more interesting infection technique than a vaginal hand that bursts from an egg. They also find Prometheus‘s David.

Michael Fassbender’s android looks distractingly like Iggy Pop when they meet him, long-haired and haggard, but still sort of weirdly ripped. He’s also descended further into becoming a Hannibal Lecter-like sociopath and a fairly impressive H.R. Giger-like artist. Without giving away more than his constantly ominous tone (and this pre-released short) already does, he has himself taken on the role of fallen angel, new creator, and destroyer. (Also, he’s fairly explicitly called The Devil, if that was all too subtle.)

Beyond its pointless obsession with Creator, Alien: Covenant also falls victim to Prometheus‘s reliance on familiar Alien beats and the worst of horror tropes. Its cast of unusually-attractive characters still don’t fully act rationally, and now they also are in relationships and occasionally have steamy shower sex. But perhaps worse than either is that now the given biological logic of the aliens has been thrown out the window. The multi-stage breeding and gestation that has made the species so intriguing here just works at the convenience of the plot. Need a fully-formed being capable of running around to burst out of a chest in a couple hours? An Alien-ready xenomorph to go from birth to adulthood in a matter of minutes? Both are now possible if naggingly abrupt.

Katherine Waterston plays the Alien franchise’s latest awesomely-competent-but-then-braless-in-a-tank-top lead. Serving under Billy Crudup’s whiney and religious captain (at a time when religion has fallen to the wayside), her role is immediately evident but well served by Waterston. Fassbender returns as both David and as Walter, a newer-generation android that speaks in a caricature of an American accent, seemingly just to contrast David’s eloquence. Demián Bichir, Amy Seimetz, and Carmen Ejogo also rank among the crew. Danny McBride plays a genuinely splendid Danny McBride Character.

In the end, Alien: Covenant is, frustratingly, a film about the flaws of creators and their creations. But rather than making us look within ourselves and up to the heavenly skies, it makes it easier to look at Scott and George Lucas. After making groundbreaking sci-fi films of the late-’70s, both handed their creations off to others who made arguably superior progeny. Decades later, mistakenly thinking their pristine inventions needed backstory, they then started over-explaining their fanatically-accepted basis, like anyone wanted any Midichlorians or jet-black pollen floating around. But that’s not to say Lucas is God to Ridley’s Man. More so, Alien: Covenant is basically Ridley Scott’s Attack of the Clones, still wildly unnecessary but at least more entertaining than that last piece-of-shit prequel.