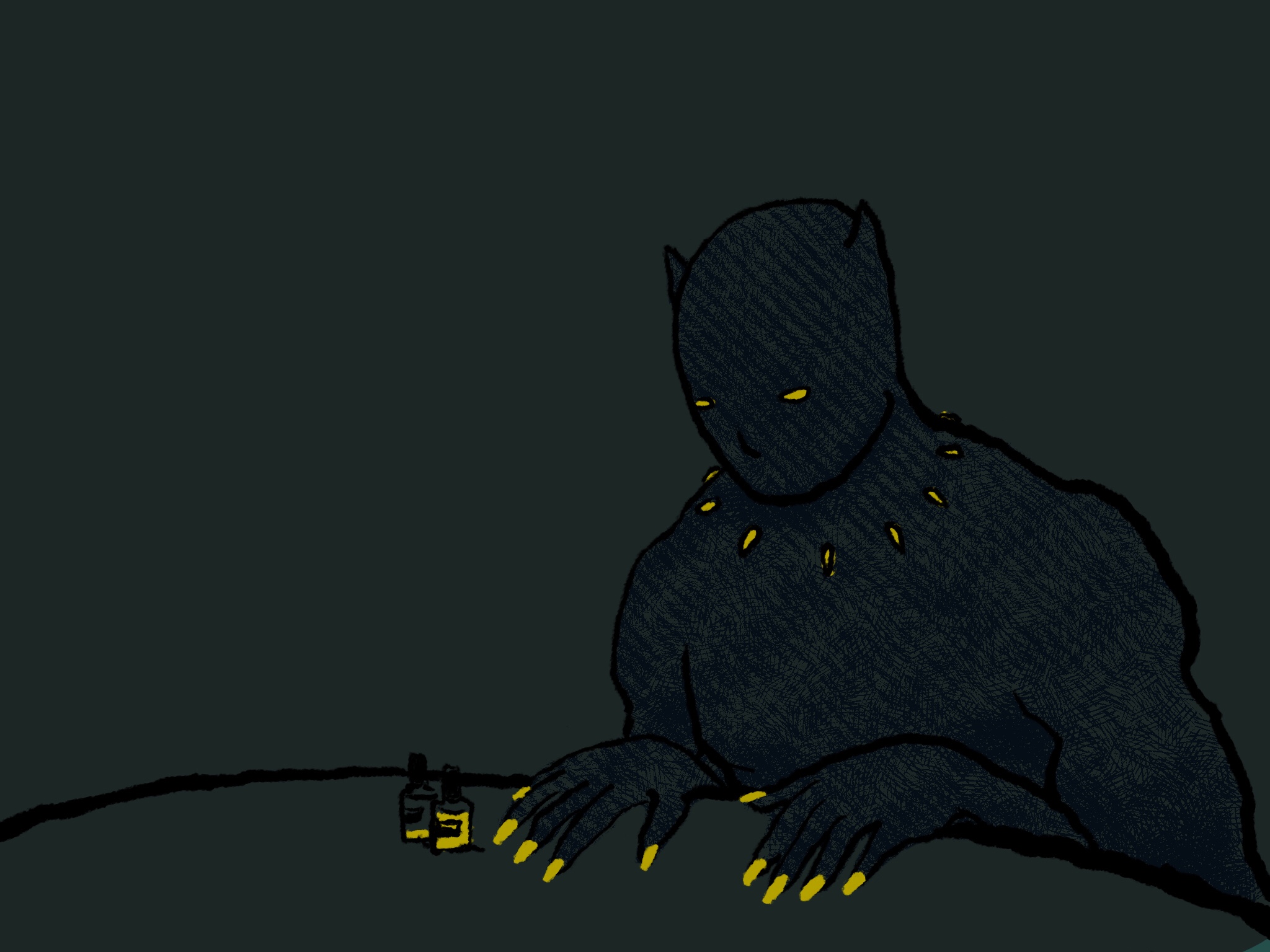 Marvel rarely veers off-book when cranking out blockbuster films based on their comic book properties. Sometimes a, say, Guardians of the Galaxy comes along to gently push the boundaries, but mainly the tried-and-true template prevails: a massive VFX budget; a compliant director; some inspired casting; a workmanlike, one-liner speckled script; and the brightest, clearest visuals possible. After 10 years and 17 films, Marvel long ago confidently perfected this formula for what makes a superhero film work. Its 18th, Black Panther, is, despite admirable ambitions, one of those superhero films.

Picking up almost immediately after the events of Captain America: Civil War left his father T’Chaka (John Kani) dead, T’Challa (Chadwick Boseman) returns home to claim his throne and the mantle of Black Panther, super-suited protector of the clandestine, technologically-advanced African country of Wakanda. This nation also introduces many supporting characters, including T’Challa’s regal mother Ramonda (Angela Bassett), sister Shuri (Black Mirror’s Letitia Wright, in a standout role), pal W’Kabi (Daniel Kaluuya), loyal general Okoye (Danai Gurira), and tenacious ex-girlfriend Nakia (Lupita Nyong’o). A mission to Korea reintroduces ally and CIA agent Everett K. Ross (Martin Freeman) from Civil War, as T’Challa hunts longtime enemy Ulysses Klaue (Andy Serkis, returning from Avengers: Age of Ultron) to protect Wakanda’s precious, otherworldly resource, Vibranium, the basically magic metal behind the country’s astonishing tech. All the while, T’Challa is forced to grapple with the loss of his father and the question of whether or not he is worthy to take his place—issues only exacerbated by the machinations of a ruthless, exiled challenger to the throne, a man absurdly named Eric “Killmonger” Stevens (Michael B. Jordan).

The rich cast of characters is emblematic of Ryan Coogler’s expansive world-building—which includes the entire Wakandan culture, technology and design—a feat not so thoroughly realized in a Marvel film since, generously, Asgard. (Unfortunately, Coogler’s film also inherits many of the Thor series’ duller elements, from the solemnity of the lead character’s homeworld, to the ghost-daddy visions, terrible green screen shots, and military coups of Thor: Ragnarok.) But like those films, Black Panther still most comes to life in culture clashes far removed from the characters’ homes; while Chris Hemsworth’s blonde god-hunk is often hilariously behind the eight ball, T’Challa and his friends are awesomely in control when in the outside “colonist” world for a thrilling 007-esque covert mission—complete with a gadget tutorial from a nerdy quartermaster, a banter-filled visit to a fancy casino, and a bullet-riddled car chase. Which is to say, Coogler sometimes gets away with what approaches a halfway-decent pastiche.

Some fights boast the same frenetic energy and fluid camera as one of Matthew Vaughn‘s likewise elevated superhero efforts, while one particular one-on-one confrontation evokes the silent midair fisticuffs of Spider-Man 2; Black Panther crosses the comic publisher aisle to liberally crib the Chekhov’s train plot device from Batman Begins. The low-meets-high tech weapons against (too) lush green scenery in the climactic battle recalls The Phantom Menace, with some unlikely reinforcements arriving Army of Darkness-style. Too bad that, while Black Panther is (mostly) narratively freestanding from the larger MCU, Coogler’s predominant stylistic homage is to fellow Marvel films and their predictable story arcs, easy quips, and artless veneer (the bad guy global domination plot is even just a rehash of the laser gun-proliferation scheme from Captain America: The First Avenger). Though here, at least, the tired Marvel trope of the main bad guy having a mirror image suit/powerset to the hero’s is justified by Killmonger’s key motivation to usurp T’Challa’s throne.

Killmonger is a could-be-thankless role sympathetically pulled off by a righteously–dejected Jordan, heeding the wisdom that all great villains don’t think they’re behaving villainously: his antagonist makes some really good points throughout Black Panther. He and the adorably eccentric Wright shine amongst the irrefutably solid cast (Forest Whitaker is also on-hand, for fuck’s sake) that makes the most of their sometimes slim characterizations. Boseman thankfully allows some amusing cracks in his unflappably stoic demeanor from Civil War as our lead, and Nyong’o makes for a way better superhero love interest than in most Marvel features, simply by being an actual character with actual motivations. (Read: not Natalie Portman or Rachel McAdams.) Yet while the obvious passion of Coogler and his performers keeps this occasionally slow or bland entertainment moving along—and immense, needed cultural significance aside—Black Panther is above-average boilerplate Marvel at best. It’s sturdy, entertaining stuff, but it’s not like it reinvents the Vibranium-powered disc.