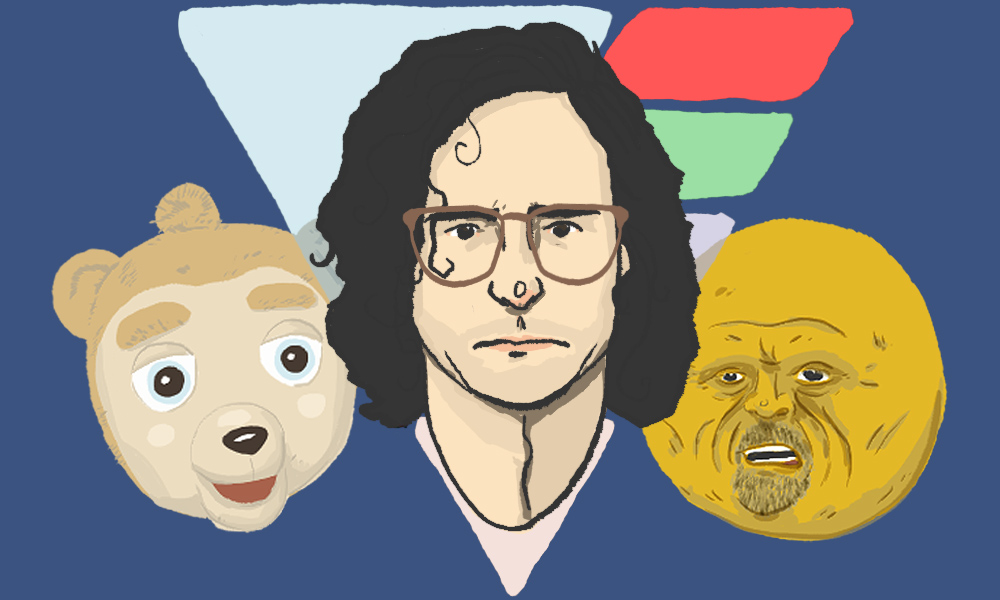 In the poisoned environment of a dystopian wasteland, James (Kyle Mooney) and his parents Jane and Ted (Jane Adams and Mark Hamill) enjoy a comfortable existence in an underground bunker. Their pre-supper prayers are punctuated by rounds of rigidly formal handshakes, the wildlife surrounding their geodesic dome “pier” are similarly stiff, and Ted drives his car to work wearing a vintage gas mask. But otherwise, these survivors are a normal, loving family. Ted and Jane dote on James, and indulge him in his obsessive fandom of the Doctor Who/Teddy Ruxpin hybrid television program called Brigsby Bear. His bedroom adorned with all manner of Brigsby merchandise, James is never happier than when watching the latest episode of the series (in his ever-expanding collection of VHS tapes) before recording enthusiastic video reactions for a greater fanbase on his ancient computer.

The thing is, Brigsby Bear doesn’t exist. The show, the toxic atmosphere, and the bunker’s bizarre family dynamic are all part of a hugely elaborate ruse perpetrated by Ted and Jane, who kidnapped James as an infant and have since been keeping him captive and raising him as their own child. Once James is rescue by law enforcement and allowed to leave the bunker—Kimmy Schmidt-style—to finally experience the world as an adult, he must naïvely reconcile the alienness of his real life and real parents (Michaela Watkins and a sublime Matt Walsh) with the now-absent comfort of his sheltered upbringing. Most importantly, he must deal with the fact that Brigsby Bear, the brainchild of his now-incarcerated “father,” is ostensibly canceled. Logically, he decides to make his own Brigsby Bear movie send-off.

As a fish-out-of-water man-child fixated on a fictional television show, it would be easy for director Dave McCary and writers Mooney and Kevin Costello to make James an object of mockery—especially to his younger sister Aubrey (Ryan Simpkins) and her hip high school friends—but James is regarded sympathetically by characters and creators alike. In contrast to McCary and Mooney’s persistently-arch sketch comedy work in Good Neighbor and Saturday Night Live, Brigsby Bear is an occasionally affecting small-scale adventure of imagination for a lovable outsider—one that’s more quaintly akin to Lars and the Real Girl than the high-concept premise may indicate. Sure, James is a weird guy, but Mooney et al. see no reason to be mean about it.

Mooney’s performance and his loopy reality in Brigsby Bear wouldn’t play at all without the grounding of the supporting cast. Simpkins and her peers sell the infectious enthusiasm of being around James, encouraging him in his quest, while Watkins and Claire Danes (as a therapist) provide the needed counterpoint as concerned skeptics. Veep standout Matt Walsh, as ever, nails every mundane line reading, and Greg Kinnear delivers another reliably-endearing, affable-but-with-sadness-behind-the-eyes turn as an understanding cop. (Frequent Mooney collaborator Beck Bennett of course shows up as a fellow policeman.) The real delight is Hamill making hay of his brief screen time, eyes lit up as he tackles multiple small oddball roles that have nothing to do with light swords or laughter-inducing poison.

Produced by Phil Lord, Chris Miller, and Good Neighbor predecessors The Lonely Island, Brigsby Bear is nearly as funny and willfully strange—especially during the bookends and a cutting sequence satirizing middling studio comedies—as its pedigree would imply. (Tim Heidecker and Lonely Island’s Andy Samberg, vanguards of willfully-strange comedy, make brief, impactful appearances.) When not stuck in familiar outcast-coming-of-age territory for the bulk of its middle, the film is a well-realized vision, and it’s surprisingly surefooted for a first-time feature director. The movie is at its best—and, yes, its most achingly twee—when embracing a DIY visual style recalling Son of Rambow, Be Kind Rewind, or any number of early Rob Schrab efforts. It’s familiarly-funny, sometimes-sappy arthouse fare, but Brigsby Bear boasts enough good nature and imagination to outweigh its sentimental indie detours.