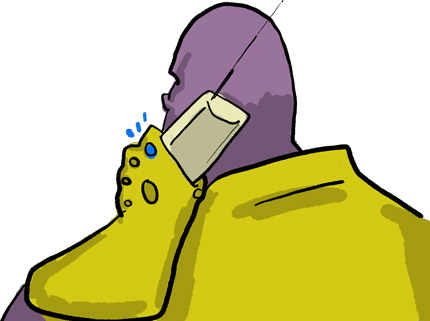 Avengers: Infinity War is a whole lot of things at once: the second sequel in the Marvel Cinematic Universe’s team-up franchise, the 19th(!) MCU film overall, and the biggest and (probably) most expensive superhero movie ever made. It’s also a funny, ambitious, overstuffed spectacle that juggles dozens of heroes and villains—mostly through Arrested Development season 4-style splintering—in representing the natural culmination of 10 years of stories and characters. As evidenced by its capitalized white serif title cards, Avengers: Infinity War is an unabashed Comic Book Event. It’s the mother of all superhero movies. It’s Marvel dumping all of its favorite action figures out on the living room floor and just going for it.

A universe-wide MacGuffin hunt provides the framework for Infinity War, with a majority of Marvel’s deep bench banding together to prevent giant genocidal alien Thanos (Josh Brolin) from collecting six gems that will grant him the power to murder half of the universe. (It’s basically the plot of Justice League but with more convincing motion capture bad guys and now watchable.) Thanos, as obsessed with a confused idea of “balance” like no one since the Jedi, is radically fixated with the idea that overpopulation prevents the universe from attaining said balance and must be culled, with the Avengers and company spearheading the counterpoint that, no, that’s pretty fucked up. A few Earthbound gems bring Thanos’s ill-defined, seemingly D&D-inspired cronies into direct conflict with the various superheroes of New York City and Wakanda, with plenty of action taking place on far-flung planets thanks to the cosmic groundwork laid by Guardians of the Galaxy and Thor: Ragnarok. Such a vast, colorful splash page to play against affords Infinity War the chance to gleefully swap characters, settings, vehicles, and accessories to show off some satisfyingly comic book-y permutations. To wit: Spider-Man (Tom Holland) in space; a gargantuan, Jack Kirby-esque weaponsmith (Peter Dinklage) menacing Rocket (Bradley Cooper), Groot (Vin Diesel), and Thor (Chris Hemsworth, tongue still stuck firmly in Taika Waititi’s cheek); Bruce Banner (Mark Ruffalo) piloting a massive Iron Man suit; and select Guardians (Dave Bautista, Pom Klementieff, an especially broad Chris Pratt) immediately exasperating Tony Stark (Robert Downey, Jr., ever in victory lap mode) on a decimated planet.

The film is nothing if not determined to capitalize on the all-in, sandbox mentality of Captain America: Civil War by providing a continuous, exhaustive string of fan-service quips and third act-worthy multi-superpower throwdowns. (As numbing as these constant top-tier skirmishes threaten to be, they certainly make Civil War’s ballyhooed airport battle set piece seem like a quaint dry run in comparison.) It’s essentially one long finale. With so much action and so many players—and despite a two-and-a-half hour running time—character development is inevitably in short supply. Sure, Stark and long-suffering girlfriend Pepper Potts (Gwyneth Paltrow) broach the subject of having a child, and Scarlet Witch (Elizabeth Olsen) and a strangely neutered Vision (Paul Bettany) enjoy their flourishing romance, but, heck, after 18 films featuring these characters, directors Anthony and Joe Russo can, and do, rely mostly on winking shorthand. As an ostensibly new character, our lavendar villain earns the only arc approaching emotional dimensionality: his complicated relationship with daughter Gamora (Zoe Saldana), who herself improbably boasts complex bonds with boyfriend Star-Lord and sister Nebula (Karen Gillan). But who cares about these sort of melodramatic detours when moons are being used as projectiles and long-beloved characters are becoming casualties?

Avengers: Infinity War makes a play to be the MCU equivalent of Empire Strikes Back, but the stakes are so high as to be rendered meaningless. (Though seeing a trio of Guardians get Cronenberged is a fairly disturbing standout in terms of the frailty of life.) Rather, it’s a genuine pleasure to see so many familiar faces sharing the screen, and that much more of a shame that the likes of Ant-Man (Paul Rudd), Valkyrie (Tessa Thompson), Hawkeye (Jeremy Renner), or Korg (Waititi) got sidelined for this rollicking epic. Yes, it’s chockablock with stupid contrivances, dubious motives, self-sabotage for plot’s sake, and yet another cookie-cutter CGI horde, but it’s also a grandly indulgent cacophony that never gets boring. This cinematic equivalent of the comic crossover event series is supposed to be bombastic, go-for-broke hokum—warts and all. If Marvel Movie Fatigue is indeed nigh, Avengers: Infinity War is exactly the kind of periodic, over-the-top release that will stave it off. It’s that rare instance when being way too much turns out to be just enough.