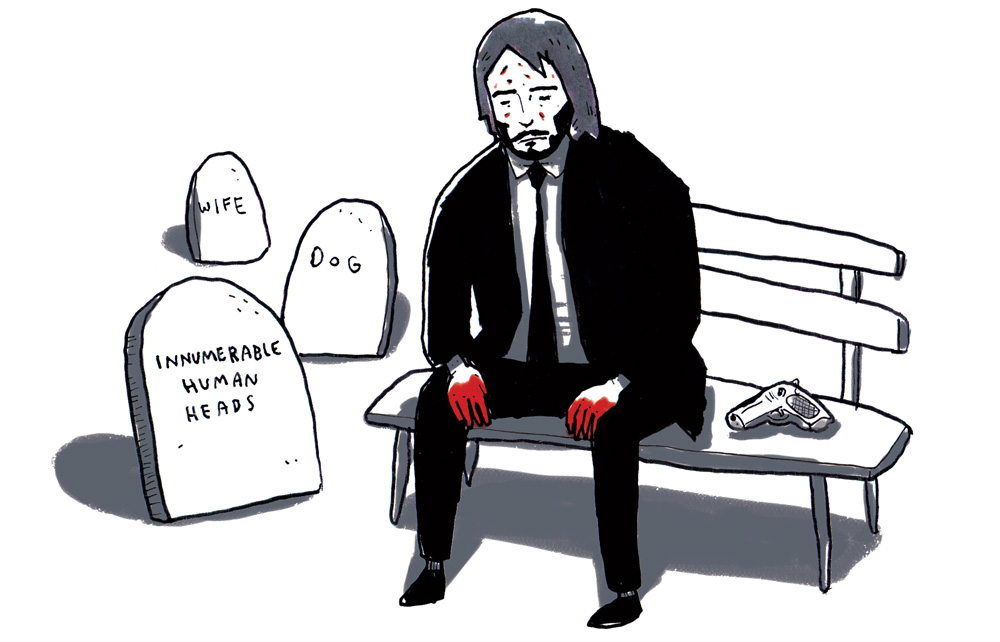 The nation’s leading threat to skull integrity has returned to screens after a little over two years for another round of coldly efficient bad guy dispatching. John Wick (Keanu Reeves), the man who makes your Goldeneye head shot accuracy look like a fucking asshole, is on the warpath again in John Wick: Chapter 2. Having already proven himself an adept murderer with a kill count of 77 just to avenge his dog’s death, Chapter 2 gleefully expands the forum for Wick’s dutiful homicides, and he adapts admirably. Welcome back, Jonathan.

As is a sequel’s wont, the film moves to Europe for a bulk of the action, hanging the thrust of Wick’s incessant double-tapping on a plot as over-explained as it is perfunctory. Our twice-reformed hero is coerced into one last job in Rome, finding himself menaced by an Italian crime lord, (Riccardo Scamarcio) his mute lackey (Ruby Rose), and Common, before—lo and behold—a villain makes the fatal mistake of underestimating everyone’s favorite black-suited ender of lives. Knowing Wick’s reaction to such a disservice in the original film gives an idea of what happens next, but perhaps not of the scope.

With a surprising penchant for world-building, Chapter 2 satisfyingly updates the Wick-verse, revealing further components of its mannered secret society of criminals and assassins. The Continental Hotel of John Wick is not the only complex supporting this system of practiced euphemisms and gold-based economy, and each has their own specialized operatives and rules—an ever-expanding list of rules that must be obeyed lest one risk an unfriendly visit from a work colleague. Who qualifies as a member of this custom-abiding underground network turns out to be rather broadly defined, giving Reeves’ gunman a wider array of allies and future victims to play against, including the always-welcome Peter Serafinowicz, and former companion-in-leather Laurence Fishburne as the ostensible King of Hobo Crime.

Though Chapter 2 is bigger than its predecessor, it hasn’t exactly improved on the formula. Its artistic ambitions remain at the same achievable and achieved level, Keanu Reeves remains perfectly fine in a role where his blank, largely-wordless acting comes off as stoic, and the Word Art closed captioning remains a tiresome gimmick. The story itself tries a little too hard for a film about the guy from Point Break shooting people to death. While the first film needed nothing more than an executed pet to drive its spartan tale, the follow-up’s hokum about honor and debts and tradition comes off as an overdone explanation for its bloodlust. All that matters is that by the time Wick is once again set to Revenge Mode, the film’s creative energy rightly re-focuses on the murders.

The cast of villains has grown a bit more colorful since the first film, while the spectrum of ways in which they perish has grown aggressively. Wick’s bread and butter is still the clean head shot—to the disappointment of nobody—but his wetwork arsenal is now more diverse in ways that must be seen to be loved; he’s a violence artist in every medium. Even when being non-lethally brutal, the action varies between viciously savage and blackly deadpan, always nailing either tone. In one particular bout of fisticuffs, two stuntmen create the John Wick equivalent of The Simpsons‘ heralded rake gag, to hilarious, wincing effect.

John Wick: Chapter 2 is the perfect example of the “same-but-more” sequel model. The no-nonsense attitude of the filmmakers and lead character was the charm of the first Wick killing spree, leaving little room for improvement; any substantial change to the template would be to its detriment. As a result it is a reliable, visceral entertainment, and agreeably on par with the first. Unsurprisingly, many plot threads are left conspicuously unresolved by the end of Chapter 2—a hopeful indication of the franchise’s evergreen appeal. Be seeing you, John Wick: Chapter 3.