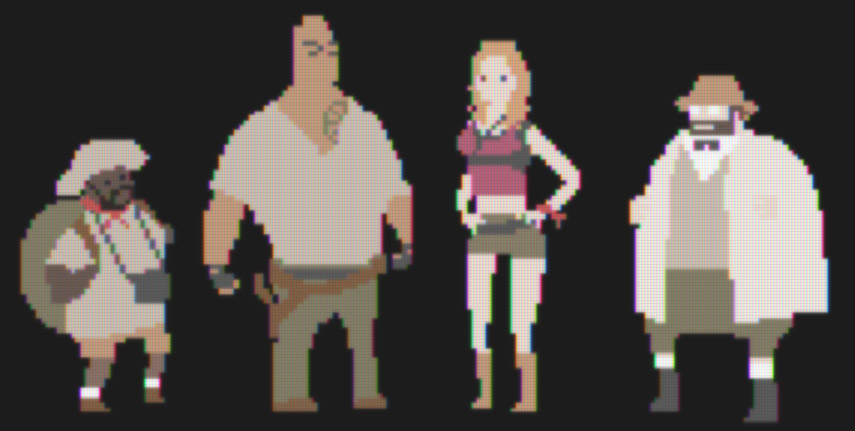 The prologue of Jumanji: Welcome to the Jungle is immediately patronizing to incoming and returning audiences alike, picking up a year after the original on an American beach (Jumanji closed with the game on a French-speaking beach, but alright), where the titular game is discovered by a jogger who’s suspiciously only ever shown in silhouette. The man digs up the tribal drum-emitting box and brings it home to his heavy metal- and Sony PlayStation-loving son, who dismisses the gift, wondering aloud who still plays board games. (Just months prior, Kirsten Dunst and her brother still played board games, but ignore that.) Overnight, Jumanji inexplicably scans the boy’s Sony PlayStation and—a là Michael Bay’s yellow change-ro-bot—updates itself from primitive board game to video game cartridge. Since PlayStations are disc-based—and apparently Sony doesn’t want to associate them with child abduction—the boy is forced to go to a different, more dated-looking console to plug in the magic cartridge and, predictably, get sucked in.

Cutting to a 2017 high school staffed primarily by comically-severe 40ish women (Missi Pyle, Maribeth Monroe), four students—video game nerd Spencer (Alex Wolff), football jock Fridge (Ser’Darius Blain), mousey outcast Martha (Morgan Turner), and shallow cheerleader Bethany (Madison Iseman)—are offhandedly sentenced to detention and the trivial-to-the-point-of-absurdity task of removing staples from magazines in the basement. The quartet discover a certain familiar, wood-paneled console down there and decide to play the still-inserted game. (Somehow, not even Spencer recognizes the device, despite the boy in the prologue owning it when the compatible Jumanji cartridge shows up, but never mind that too.) With their in-game characters selected, a cheap, dated (especially in terms of video game-based movies) visual effect sucks the teens into the world of Jumanji, the most sprawling, generic jungle adventure this side of The Phantom. There, helpful guide Nigel (Rhys Darby) instructs the group to embark on a linear, unimaginative journey: retrieve a jewel from a flat, one-dimensional villain (Bobby Cannavale), then say “Jumanji” to return to the real world. (These instructions will be provided ad nauseam, because it’s a joke that Nigel is designed to exposit endlessly—a convenient way for the writers to show their adamant distrust of the audience, but that’s fine.)

Anyone who’s seen the Jumani: Welcome to the Jungle trailers (and yes, of course the heavily-featured Guns N’ Roses song also made it into the film) should be all-too-familiar with how uproariously incongruous the teens’ avatars are within the game. Spencer is now a muscular, impossibly-adept archaeologist/adventurer (Dwayne Johnson); Fridge is now a screeching, diminutive zoologist and weapons mule (Kevin Hart); Martha is now a problematic, Lara Croft-style ass-kicker (Karen Gillan); and, in an abridged retread of seminal Rob Schneider work The Hot Chick, Bethany is now a fat, Jack Black-esque male cartographer (Jack Black). The juxtapositions are supposed to fuel the movie’s humor, but the performers can only squeeze so much out of their workmanlike script (credited to five screenwriters, natch); Gillan admittedly gets a lot of awkward mileage out of standing around with her arms crossed not knowing what to do with her overly-sexualized appearance, but Johnson’s listlessness makes discovering his own biceps a tired runner from the jump (Southland Tales provided a more enjoyably neurotic Rock ten years prior). As similarly-fetid as his other comedy work this year has been, at least Johnson was still putting in some effort then. Welcome to the Jungle‘s sole performance of note comes courtesy of Too Many Cooks murderer William Tokarksy, distractingly appearing as a merchant in one of the film’s many contemptuous video game nods.

Jumanji: Welcome to the Jungle boasts many of these smirking winks, all explicitly pointed out through Spencer’s condescending dialogue—seemingly an extension of the filmmakers’ own flippancy toward the medium. (Even the most casual gamers will notice the lazy inconsistency the filmmakers show in creating an even slightly credible retro game system.)  There are cutscenes and character menus; Tokarksy, Darby, and the kid from Bad Words (Rohan Chand) never let up with the looping phrases bit (despite hammering this repetition home, the film finds all four characters still somehow forgetting Nigel’s tutorial, but that’s irrelevant); and another heavily-telegraphed gag sees members of the gang occasionally meeting their doom, only to moments later drop from the sky, healthy again. (Our resident gamer somehow doesn’t realize the three disappearing tattoos on their forearms represent “lives” until about halfway through, but that also doesn’t really matter.) Jokes and story beats are likewise hamfistedly foreshadowed throughout, robbing Jumanji: Welcome to the Jungle of any potential weight when it takes until the end of the film to verify that, yes, you were exactly right about the identity of the grieving old man (Tim Matheson) Spencer and Fridge walk past in the first act.

Even among its peers in the abruptly-realized way-after-the-fact sequel/reboot genre, Jumanji: Welcome to the Jungle is in the bottom tier. It’s a success only in being the slightly better video game-based Jumanji than the actual, awful video games that have come before—yet still quite accurate to the dire “based on the blockbuster hit!” video game format, taking the basic premise and stretching into a far less enjoyable, thinly realized, and just recognizable follow-up than even the NES misfire Goonies 2. Helmer Jake Kasdan, in his follow-up to the desperate trash of Sex Tape and Bad Teacher, had made something that again asks what happened to the enjoyable director of Walk Hard, Zero Effect, and many a Freaks and Geeks episode. This film’s tacit Orange County reunion makes one yearn for even that Kasdan effort’s modest charms.

Irretrievably apathetic, everything in Jumanji: Welcome to the Jungle is phoned in, from our Central Intelligence co-leads on autopilot, to some truly crap effects and a laughless, insufficient story—get a MacGuffin from a bad guy and say a word; that’s it. Jumanji: Welcome to the Jungle is lousy with lampshades hung to get from point A to point B, but using its video game setting as an excuse for narrative laziness is the biggest lampshade of all. (But again, don’t worry about it, okay?)