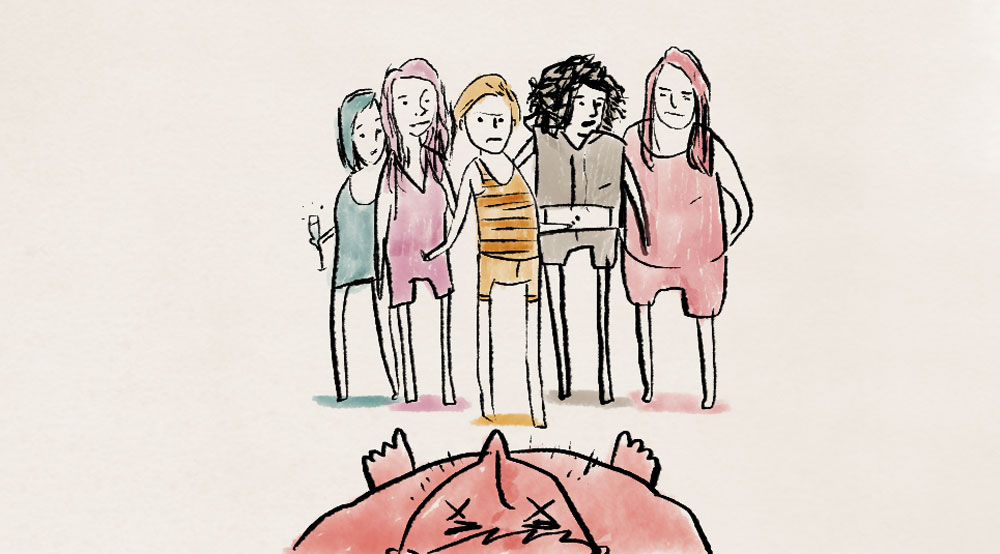 It makes sense that Rough Night comes from some of the people behind Comedy Central’s Broad City (director/co-writer Lucia Aniello, co-writer/star Paul W. Downs, star Ilana Glazer); even though the film is ostensibly about murder, the half-hour television veterans drape their film in the brightly-lit, jokey-as-all-hell trappings of a TV comedy.

Like a darker Bridesmaids, Rough Night follows five foul-mouthed best friends as they try to cover up the accidental manslaughter of a stripper during a raucous bachelorette party. This dark comedy sub-genre is well-tread, but—in spite of its R rating—Rough Night is far more Weekend at Bernie’s than Shallow Grave.

In the unfussy setup of the film, Jess (Scarlett Johansson) is about to be married to the milquetoast Peter (Downs), so she and friends Pippa (Kate McKinnon), Alice (Jillian Bell), Frankie (Glazer), and Blair (Zoë Kravitz) travel to Miami for a weekend-long bachelorette sendoff. After a night of gobbling booze, marijuana, and cocaine, they insist on ordering a stripper for the bride-to-be, which proves to be the first in a line of extremely poor decisions when an overzealous Alice leaves their unclad beefcake exsanguinated from a vicious plonk on his noggin. Their attempts to conceal what they’ve done (in a literal glass house) while figuring out a solution tests their friendships and the audience’s patience for loud, predictable comedy (and in far milder ways than the very similarly-framed Very Bad Things).

That the rote, mostly-single location Rough Night succeeds at all is due in no small part to the efforts of the core ensemble. Obviously eager to play outside of the Marvel Studios confines, Johansson seems game, even if she’s a little out of her depth as the straight-man to her riffing costars. Kravitz (surprisingly adept at a dry one liner) and Glazer have fine enough chemistry as bickering ex-girlfriends, while McKinnon proves she has yet another brand of loopy weirdo to trot out of her stable. Bell gives her most near-human performance yet, approaching something resembling pathos in the film’s sole scene of emotional drama: the trope-laden, late-second-act laying of all cards on the table between shouting friends.

However, like fellow dirty-minded (and ultimately pointless) Black List script Sex Tape, Rough Night ends up relying on its cast to make up for unimaginative writing riddled with missed opportunities. In a B-plot that stretches a joke about disgraced, diaper-wearing astronaut Lisa Nowak way past its limits, Downs entertains a revolving door of bit players—from comedians Bo Burnham and Eric Andre as groomsmen, to fast-food pitchman Peter Grosz and Buzz McAllister himself, Devin Ratray. Dean Winters even shows up in a very Dean Winters role during a lazy, insanely left-field deus ex machina ripped straight from a 1991 Touchstone Pictures comedy. Every punchline can be seen from miles away (a discovered sex swing proves useful later), and every thread (Blair is recently separated from her husband) has its neat bow telegraphed from the get-go. The obviousness with which the events and jokes unfold, combined with the utterly unremarkable small screen sensibilities of Aniello, keep Rough Night from rising above anything but a future basic-cable staple.

Watchable but disposable, Rough Night is a long, bland sitcom masquerading as a black comedy. Its dark logline is betrayed by an overall cheerful eagerness to please. Rampant cussing and an obsessive fixation on genitalia do not an edgy film make—look no further than the recent, similarly-dire Baywatch for proof of that—but Rough Night is at least modestly entertaining. And yet, for a movie featuring multiple bloody head traumas and Demi Moore eating a girl out, Rough Night remains woefully toothless. This night should have been far rougher.