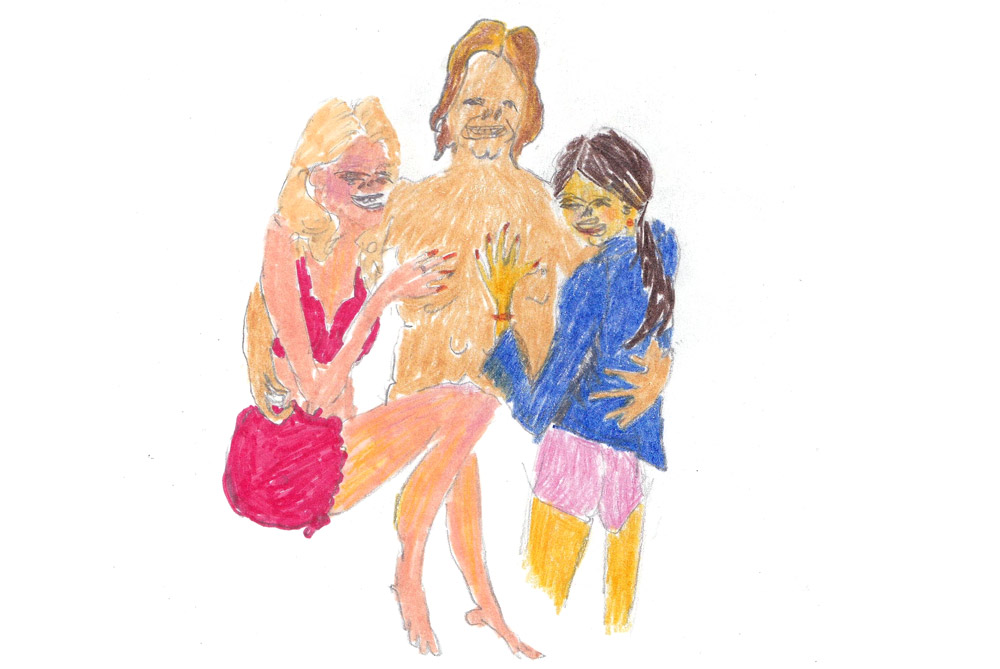 Debuting on prestige platform DirecTV Cinema—provider of early releases from roundly-awesome studio A24 (Free Fire, Good Time)—a month before its perfunctory theatrical run, The Layover is the sort of sub-Farrelly Brothers effort manufactured to clog Blockbuster new release walls in the early-to-mid aughts. Cheap in every sense of the word, it’s a hack product that represents the nadir of the inconsistent girls-can-be-gross-too comedy trend (Bad Moms, Rough Night). That the uninspired script comes from It’s Always Sunny in Philadelphia writers David Hornsby and Lance Krall is shameful enough; that Academy Award nominee William H. Macy chose this as his directorial followup to the nominally respected Rudderless is damning.

The Layover, like similar sex-road comedy films before it, uses only the most cursory of motivations to send codependent buddies on a mission to get somewhere and/or fuck someone (in this case both). Kate (Alexandra Daddario) and Meg (Kate Upton) are roommates, self-professed best friends since 5th grade, and respectively defined as the beautiful, uptight woman who watches The Bachelor and the beautiful, unabashedly promiscuous woman who watches The Bachelor. When both suffer embarrassing career disasters on the same day, they logically decide that a trip to Florida is the solution to their woes. However, their friendship is tested twofold when a hurricane diverts their plane to St. Louis and they begin to viciously compete (Because they both watch The Bachelor, remember?) for the affections of a hunky firefighter (Matt Barr) they met on the flight. Never as funny or outrageous as indicated, Kate and Meg’s escalating one-upmanship antics fuel a cross-country odyssey decreasingly about Florida or the man, and increasingly about besting the other no matter the cost.

As a sophomoric farce of modest ambitions, The Layover is the type of film that lives or dies based on the merit of its performances and gags. Neither are up to the task. (Macy’s filmmaking aptitude doesn’t help matters; he demonstrates a serviceable competence on par with, at best, Hornsby and Krall’s sitcom-heavy résumés.) Earlier this year proving she’s down for selling broad comedy with a side of titillation in Baywatch, Daddario is the bigger performer in this two-hander, loudly mugging her way to dominating her costar, an actor whose burgeoning career is only technically based on her skills as a thespian. To her credit, Upton is given a better showcase here than in, say, The Other Woman, but only because her supporting cast is so weak. Fading comic ringers from the intersection of TV and film portray the supposedly wacky characters that Kate and Meg encounter on their trip, with Molly Shannon as a brassy, inappropriate, Molly Shannon type, and Rob Corddry as a smug, passive-aggressive, Rob Corddry type. They and Kal Penn sleepwalk through their brief scenes, with only Matt Jones’ similarly-typecast, sweet-natured oaf—and sole somewhat likable character against the monsters that are the leads—given a modicum of development. (Too bad that, at 88 minutes, The Layover crushes many of Jones’ quips under loud pop music montages.)

Even a more enthusiastic cast (only Daddario seems to be actually trying here, with a schtick consistently almost wholly of screaming, falling down, or screaming while falling down) couldn’t elevate the limp, puerile material in The Layover. A gag about foul-smelling burps offending plane passengers goes on way too long (a chronic problem in the film) and seems completely backward considering the existence of iconic scenes in Blazing Saddles or Dumb & Dumber. Similarly, another bit of well-tread scatology involving a filthy gas station toilet undercuts itself by not going big enough; some splashes of brownish water on a woman’s clothes make for a pretty tame gross-out joke, no matter how madly the woman is screaming. Mostly this stupid shit is supposed to be funny because the people doing this stupid shit are markedly-attractive women, but that’s meeting The Layover more than halfway, for when it’s not putting Daddario and Upton through the ringer for an easy laugh, it’s pointing out their bodies as a lascivious distraction.

The Layover is a lazy, low-rent movie that belongs buried in the Late Night Comedies section of Netflix. Virtually bereft of any entertainment value, it takes a predictable, one-note premise possibly fit for a 30-minute time slot (there’s even an abrupt moral coda) and expands it to feature length to yawningly tedious results. For the sake of the participants it should be forgotten as quickly as the laughable distribution would dictate. An actual layover would be more fun; airports at least have bars.