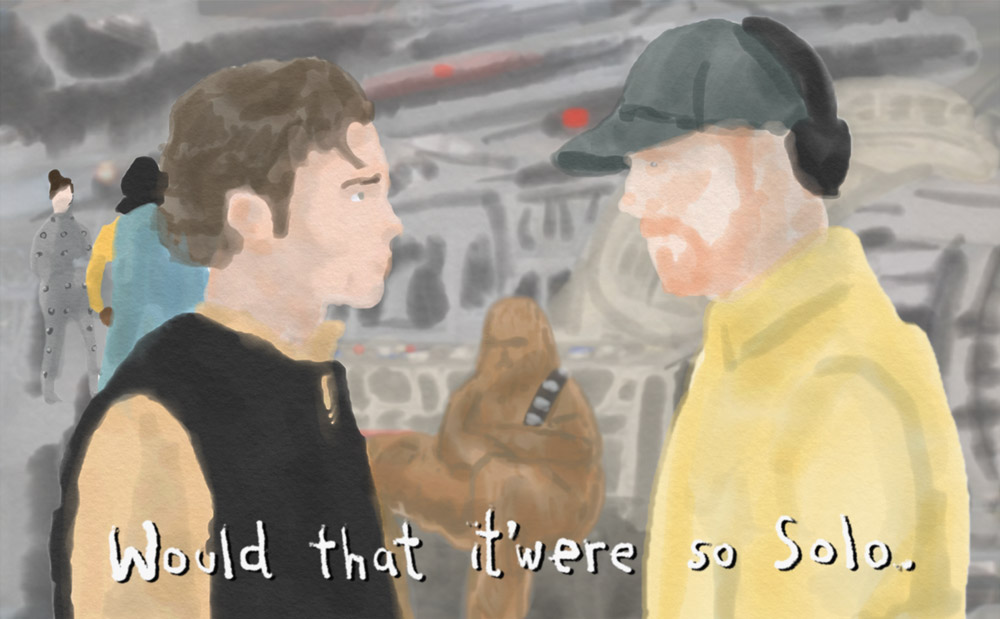 The latest in a line of embattled Lucasfilm properties under the new Disney regime, Solo: A Star Wars Story boasts a not-insignificant amount of behind-the-scenes baggage. Famously, original wunderkind directors Phil Lord and Chris Miller (The Lego Movie, the Jump Street films) were jettisoned late into filming, and seasoned veteran Ron Howard (EDtv) was brought on to right the course, reportedly reshooting about 70% of the prequel film about everyone’s favorite rascally spaceship driver. Lord and Miller’s fresh, exciting voices were silenced in favor of the safer, more approachable timbre that’s narrated Arrested Development for nearly 15 years now. Pity that the narrator is behind the camera for this film.

Han Solo’s origin film finds the hero (Alden Ehrenreich, smirking in Harrison Ford’s shadow) and his squeeze Qi’ra (an increasingly genre-entombed Emilia Clarke) pulling off scams and F-Zero-style speeder chases on scummy, desaturated ship-building planet Corellia. Eager to free themselves of the native underworld element (including a nifty Linda Hunt-voiced crime boss), the couple steals enough valuable MacGuffin fuel (coaxium, this time) to bribe their way offworld. Only Solo is able to exit safely, beginning a years-long odyssey to become a pilot, get his own ship, and return to rescue Qi’ra.

During a brief stint (and thoroughly unconvincing sequence) in the military, Solo runs afoul of a group of thieves (Thandie Newton, Jon Favreau) led by Tobias Beckett (Woody Harrelson in a thoroughly unconvincing hairpiece) and insinuates himself into their next big score: lifting a huge quantity of coaxium from a set piece-demanding midair train. With credit signs in his eyes, Solo’s new life as a smuggler—and scoundrel—takes him on a series of rote adventures, eventually meeting future pals Chewbacca (Joonas Suotamo) and Lando Calrissian (Donald Glover, channeling Billy Dee Williams when he feels like it) as well as an eccentric, ineffective British crime boss (Paul Bettany, doing a watered-down Goldblum-in-Thor: Ragnarok) and a delightfully quarrelsome British droid (Phoebe Waller-Bridge).

Solo is boilerplate prequel stuff, combining expected notes (the first glimpse of Solo’s future ship the Millennium Falcon—and the once offhandedly-teased card game leading up to it) with arbitrary revelations (How’d he get that name and blaster pistol?) in the titular hero’s journey toward meeting Luke Skywalker and Obi-Wan Kenobi in that cantina on Tatooine. Without these fan service touchstones to steadfastly rapel between, there’s not much plot to grab onto in Solo. (True to its brigand protagonists, the film is a long shell game of who needs or has the coaxium, and why, when, or how.) Which would be fine if Howard handled these previously only-mentioned moments in Solo’s history with a suitable amount of aplomb. He doesn’t.

The cache of familiarity in these moments should play by default for the built-in Star Wars fan base (it’s hard to imagine the uninitiated bothering with Solo), but in the hands of the pervasively blasé Ron Howard (How the Grinch Stole Christmas), even gimme beats like Chewbacca and Solo’s first cockpit pairing are somehow bungled. (By contrast, J.J. Abrams was able to make business in the Millennium Falcon instantly exhilarating just a few years prior—with new characters to boot.) Howard cakes Solo in a veneer of mediocrity (John Powell’s listless shrug of a score; unimaginative, just-follow-the-action medium shots) in an attempt to conceal its dysfunctional content (a few junky, seemingly repurposed alien costumes; characters and subplots suddenly appearing or disappearing). Our most accomplished workmanlike director does his styleless best with the bum hand he was dealt, but the unmemorable, perfunctory nature of the winking callbacks, (troublingly girlfriend-obsessed) story, and performances by much of the main cast (especially the romantic leads) can’t manage to raise much of a pulse in Solo.

Which is not to say the film is without its pleasures. Glover and Waller-Bridge are winning in their roles, brightening the film all-too-briefly (it’s no wonder there’s now talk of Calrissian’s own film) as an adorably mismatched pair of smugglers. And, straying even farther from the mythic hokum of the main Jedi/Skywalker lore than preceding Star Wars Story Rogue One did, Solo benefits from being a welcome tangent into the street-level affairs (one gigantic Lovecraftian space beast aside) of this very old, very distant galaxy. The passable fun comes in fits and bursts that never deviates too far from an unambitious baseline. (Remnants of Lord and Miller’s truly ginchy heist comedy are glimpsed throughout, much like Edgar Wright’s aborted Ant-Man involvement.) But that’s what you get when patronizing the predictable neighborhood diner that is Ron Howard’s oeuvre; no matter which of his too-eclectic wares you select, it’ll probably be fine, with the panini (Apollo 13) tasting slightly better, and the salmon plate (The Dilemma) being slightly more dubious. (Not to mention the near-constant Dan Brown daily specials.) With Willow and now Solo, Howard’s Lucasfilm efforts could stand to be a little less bland.