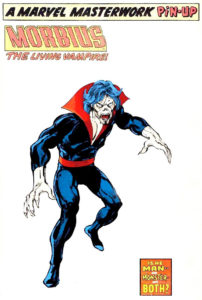 Though they’ve given creative control of Spider-Man back to Marvel, Sony’s webbing is still clinging to, and stretching so very, very thin across, the rest of the hero’s universe. They’ve got a Venom movie currently in production. They’ve got a Black Cat and Silver Sable spin-off in development. They’re planning projects focused on Carnage, Mysterio, and Kraven the Hunter. And now, they’ve started work on a movie about Morbius, the Living Vampire, the Spider-Man villain who is a living vampire.

The film is reportedly being developed under the title Morbius. There’s already a team of writers working on the script, and if you’re a living vampire fan, you’re probably not going to like who they are. According to The Hollywood Reporter, Morbius is being written by Burk Sharpless and Matt Sazama, a pair whose best-received film was this summer’s completely mediocre Power Rangers reboot. Less favorably, they are the writers responsible for Gods of Egypt, The Last Witch Hunter, and Dracula Untold. So while Morbius may not exactly be in good hands, it is at least in hands that have dealt with blood-suckers and misguided franchise nonstarters.