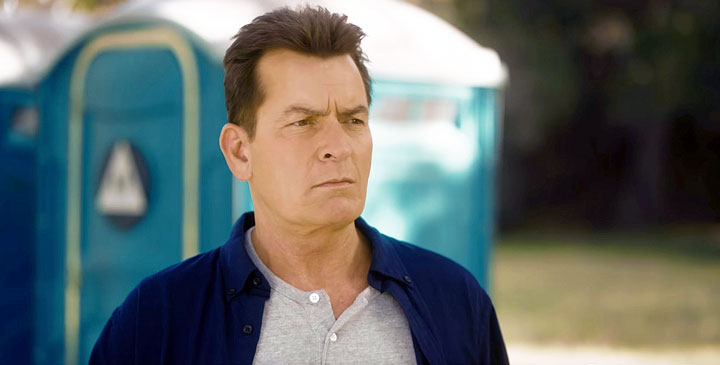 As well-represented in this still from the film, Mad Families appears to be the face of Charlie Sheen atop a rectangle filled with shit.

The film is the next project from Crackle, and it’s an unfortunate but natural successor to their abysmal Joe Dirt 2: Beautiful Loser. As with that movie, Grown Ups writer Fred Wolf directed and co-wrote with David Spade, and the movie immediately comes across as a comedy too poor for even Adam Sandler’s Happy Madison Productions to dirty its shorts with.

Charlie Sheen stars alongside King of Queens‘s Leah Remini, Glee‘s Naya Rivera, former SNL cast member Finesse Mitchell, Joe Dirt 2‘s Charlotte McKinney, Napoleon Dynamite‘s Efren Ramirez, Waterboy‘s Clint Howard, and other people you would not be surprised to see in such a thing. The high-concept premise sees a white family, a black family, and a Hispanic family somehow triple-booked for a single camp site. For reasons unfathomable, the solution to this dilemma is that the families have some sort of multi-event competition to win the space. Over the course of these events, the asshole patriarchs of this trio figuratively and literally swing their dicks, telling each other the sort of racist jokes one politely chuckles at during Thanksgiving dinner but later feel they should have spoken up against.

While, undoubtedly, the resolution will see the multi-ethnic dads getting along, we’re apparently also meant to think their tired schtick is either genuinely funny or offensive enough to incite a laugh. In this trailer, neither is true. It all just comes across as lazy, out of touch in its sitcom machismo, and desperately un-P.C.—particularly as written by two middle-aged white guys and acted out by the former star of Two and a Half Men.

As aging-comic-actors-and-their-downtrodden-attractive-wives camping comedies go, this succeeds only in besting Grown Ups 2 for utterly gratuitous needlessness. Stream it this Thursday on Crackly, but only if you wish to see three Tim Allen archetypes in a race war for some reason.