With the assistance of a lurking Edward Norton, Wes Anderson has made official his next delightfully artificial film. It’s about dogs. 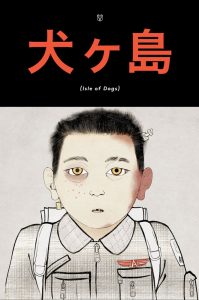 In a video just posted to Vimeo, the director announced Isle of Dogs, an animated feature that will dive down the same stop-motion foxhole of The Fantastic Mr. Fox. Norton is voicing, in his words, “one of the lead dogs, actually.” Also providing voices: Bryan Cranston, Bill Murray, Jeff Goldblum, Scarlett Johansson, F. Murray Abraham, Tilda Swinton, Kunichi Nomura, Harvey Keitel, Akira Ito, Akira Takayama, Koyu Rankin, Yoko Ono(!), Courtney B. Vance, Greta Gerwig, Frances McDormand, Bob Balaban, and Liev Schreiber. Judging by the concept art in the poster (right), it seems that perhaps the Japanese cast could be voicing the humans, while the Hollywood stars and Anderson regulars would voice the canines. That’s just speculation on my part, though. Anderson’s calmly droning voice did not actually reveal that.

But what it did reveal was that Anderson is offering up the chance to get an Isle of Dogs shirt, the aforementioned poster, and even a role in the film. Over at CrowdRise, he’s raising money for the Film Foundation, a non-profit organization founded by Martin Scorsese and dedicated to protecting and preserving motion picture history. A ten-dollar donation gets you entered to win a trip to London to voice a dog or other prizes; $100 gets you a limited edition Isle of Dogs t-shirt; $50,000 and $100,000 donations score other fantastic gifts, but it’s honestly not really worth looking into given our financial situations.