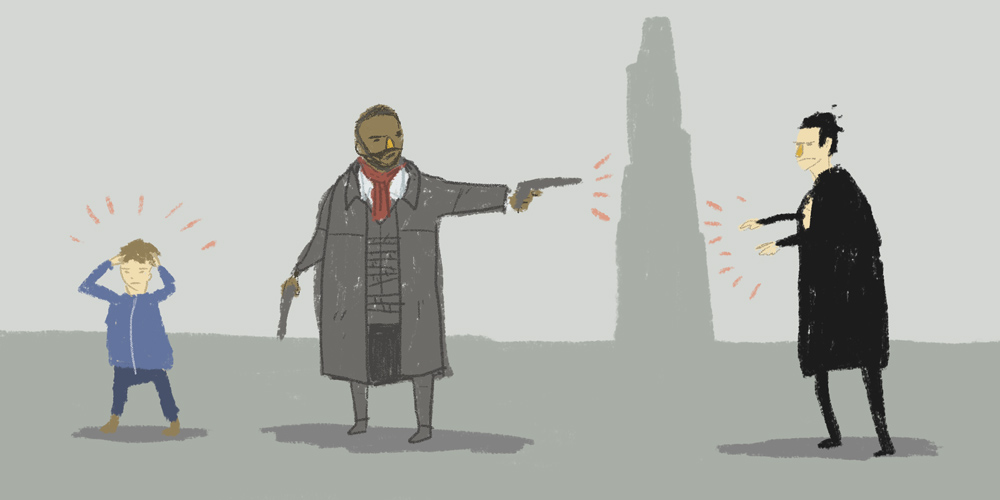 Running a slim 95 minutes, The Dark Tower is too short to tell the story that Stephen King source novels’ fans want to see, yet already too long for anyone to sit through once it starts. It’s a tedious, rote film about a serial child abductor, a firearms enthusiast, and Jake, a Manhattan boy plagued by visions of both of these 40-something guys. And by the time we reach the credits, Jake ends up being the only one who cares about either of these other turds.

The titular Dark Tower is neither a destination nor much of a MacGuffin for the story. It’s something more inscrutable and far less interesting—a jagged spire that sits in the center of a Trivial Pursuit board of a map, awaiting an ever-too-long game to end. If the tower is destroyed, the loosely-defined multiverse of author Stephen King collapses, letting in some kind of horrible gargoyle demons from beyond. Naturally then, there’s a bad guy who wants to ruin it for just that reason.

That awful dude is Matthew McConaughey’s Man in Black, who very quickly loses his mystique when he is referred to as “Walter” throughout the majority of the film. He’s a powerful sorcerer who wears all black (makes sense), kills and tortures at the flick of his wrist, and is a real close-talker. In case that isn’t enough to establish his evil nature, he also kidnaps gifted teens from various dimensions and plugs them into his big-ass laser, using their psychic energy to power his shots at the tower. To accomplish that last task, he has an army of hairy little freaks—covered in human-skin disguises—abducting the kids. And McConaughey, the Wicked Witch of early-’00s rom-coms, watches this all from crystal-ball visions in a faraway castle.

As seen through one of Jake’s many dreams—he sketches them all, because remembering any of this movie is indeed an effort—Walter is opposed by a “Gunslinger” named Roland (the ever-enjoyable Idris Elba). Clad in a not-at-all-lived-in outfit that’s cowboy-meets-The Matrix, Roland and his fellow Gunslingers have long been fighting Walter to save the rarely-seen tower, only to be bested by his seemingly omnipotent magicks. Jake fairly quickly crosses universes to meet Roland, and the two embark on an inexplicable, insipid quest to both seek out and avoid this Walter guy.

Rooted in a series King began back in 1982, The Dark Tower isn’t too far apart story-wise from that decade’s other kid-in-a-strange-land tales like The NeverEnding Story, Labyrinth, and Return to Oz. The unfortunate difference is that those imperfect films at least had oddball charms and interesting designs. This adaptation has none of that. Its most interesting characters and biggest action set-pieces stink of a broadcast television miniseries you would never bother finishing.

The Dark Tower would in some ways just be painfully anodyne, but its wasted talent and laughable climax sink it by the time it reaches its finale. Director Nikolaj Arcel enlisted such iconic talents as McConaughey and Elba—two of our most watchable, charismatic-if-depressive television detectives—together on-screen. Yet the results are what amounts to a failed TV pilot, heavily gesturing toward a presumed second episode it should never get.

The various writers—among them, the remarkably unremarkable Akiva Goldsman—should take the blame in this as much as Arcel’s styleless direction. But no matter who’s responsible for this affair, in the end, The Dark Tower is as its titular high-rise: a supposed universal center-point that is actually a blank cypher, a meaningless edifice no one should ever see more of.