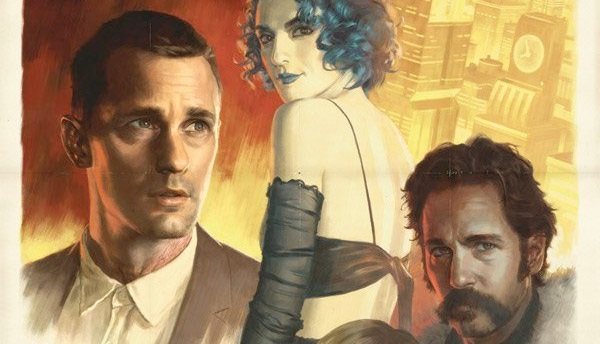 Nine years now since Moon announced his arrival as sci-fi/fantasy cinema’s new wunderkind, Duncan Jones adds another title to the increasingly-convincing list of why he’s maybe not with Mute. His follow-up to the critically drubbed Warcraft, this film is much harder to watch, both as its own failed product and as a part of Duncan’s declining oeuvre. While the director could—and recently did—pin Warcraft‘s fate on studio/developer politics, franchise expectations, and the doomed video game genre, this one’s all on him: Mute is a personal effort Jones has been trying to get off the ground for nearly a decade. Now that it’s on screens, with Netflix footing the bill (and presumably giving their typically loose reins), seeing it as a passion project makes it all the harder to swallow.

Seemingly assembled from a dice roll of random story elements and character affectations, the film sees a mute Amish bartender, a mustachioed AWOL single dad, and a cybernetics expert/veteran/pedophile finding a missing sex worker in a far less thoughtful Blade Runner setting (here, a seedy Berlin of the near future). In case Ryan Gosling wasn’t enough of a quietly glaring blonde surrogate for Harrison Ford in 2049 (or, for that matter, Joel Kinnaman in Netflix’s other recent Blade Runner less-than, Altered Carbon), Mute puts Alexander Skarsgård in the lead as Leo, our aforementioned bartender and titular non-speaking role. As explained in a mostly unnecessary prologue, Leo’s throat was slit by a boat propeller when he was playing as a boy. Despite the accident underwater, Leo remains fixated on swimming, dolphins, and other sea life (as seen through the imagery of his whittlings and doodles, all of which look like designs for sorority girl ankle tattoos). 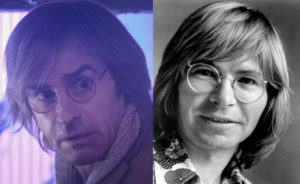 He works at a night club with his girlfriend Naadirah (Seyneb Saleh), the two recreating a sort of Forrest Gump-Jenny thing exemplified when Leo gets too defensive and attacks a drunken patron who directs lewd comments at her. He gets fired and, shortly after, she disappears, sending our gawking, unspeaking, plainly-dressed hero lurching into a neon-noir quest to find his lost squeeze. Along the way, his path crosses with neo-Berlin’s Russian mob and two of its wise-cracking, bowling-loving, underworld surgeons: former U.S. military medics Cactus Bill (Paul Rudd, doing his best behind an oversized furry parka and matching ‘stache) and Duck (Justin Theroux, for some reason beneath a John Denver wig and glasses). Despite the considerable charisma behind the hair piles, both characters prove rarely likable.

The script, from Jones and Michael Robert Johnson (appropriately, this is only Jones’s second proper screenplay credit after Warcraft), has all the vacuous naïveté of its lead and not enough of his keeping quiet. Leo’s investigation, if you can even call it that, scarcely has a narrative dragging it from one clichéd clue to the next. When Naadirah scrawls in Leo’s notepad and tears out the paper, you already know he’ll be shading in to read the indented writing a half hour later; when she gives him a mobile phone he accepts despite his anti-technology faith, you know it will be ringing the moment she’s gone; and when he shows her a bedpost he’s carved with what else but marine life? Well, you might not have known he’d wield it through a bludgeoning rumspringa, but you should have. Is that not the dramatic principle of Chekhov’s whittled bedpost club?

To be fair, Blade Runner, the impossible standard Mute is doomed to be compared against, isn’t exactly so densely narrative or complex a tale, either. But that has some big ideas about humanity in there—and maybe more importantly, it uses its sparseness to contemplatively meander a memorable, beautifully realized world. Mute, as indebted as it is to Ridley Scott’s 1982 film, barely merits comparison.

Shot by cinematographer Gary Shaw, whose work you very likely haven’t seen in a film since Moon, the Berlin of Mute is well enough designed but shot as workmanlike as the straight-to-TV movie it essentially is. The soundtrack, likewise, never reaches the atmospheric heights one’s come to expect from the genre. While typically standout composer Clint Mansell (also of Moon) does some solid work, what he’s done here is something more akin to his Mass Effect 3 score, apt for its futuristic setting but also seemingly designed to dissolve into the background of a video game level.

But Mute‘s larger problem is that, for being about a man who doesn’t speak, it has a lot of awful lines yet not a lot to say. Starting from the moment the line “itty bitty titties, huh?” is spit from below Rudd’s handlebar plumes, the rant in which he denounces Duck’s pedophilia lasts a full three minutes; immediately afterward, they go hang out at a mall, and neither of these irredeemable characters is any more or less redeemed than they were before. The segment could easily be cut, nearly dipping Mute below its unbearable two-hour mark, but there it is—right alongside a bunch of other, similarly painful scenes involving all of Quentin Tarantino’s violent, sordid depravity but none of his gleeful abandon or wit.

Credit where it’s due, though, at least Mute‘s arbitrary perversity—along with Rudd and the still-pretty-cool-if-contrived setting—saves it from being a completely forgettable failure. Still, if Netflix just wanted to offer a film about some bowling degenerates and a lumbering Amish tool, they’d have been better off getting the streaming rights to Kingpin.